Recently I embarked on an incredible life changing experience. Not too long ago I was fortunate enough to travel to one of the last unexplored corners of the Earth, Papua New Guinea. Before I set off on my journey I had only had second-hand knowledge of this fascinating country, however over the next week I would intimately get to know so much about this captivating land.

I hope you enjoy the evolution of my being immersed in some of the most unique settings of my life, while quickly falling in love with an incredible country. With each day, the journey became more unique and exciting. Papua New Guinea will, without a doubt, change the way you see the world and how you want to travel in such a positive way.

As the sun started to set after an immersive day of exploring, I found myself sitting on the patio of the lodge, high up in the highlands watching the clouds roll through the valley beneath me. In front of me was a view that seemed reserved only for the gods – atop the entire world.

I was at Rondon Ridge, 40-minutes from Mt. Hagen and 7,100 feet above sea level. That night, I would be the sole occupant of this beautifully appointed property in a very remote and rural setting. It was my castle in the highlands. Twelve rooms line the top of the valley, each one with a patio that looks out over the hills and onto to Mt. Hagen

The lodge is adorned with indigenous carvings and artwork, while life-sized statues of warriors stood watch over the dining room and lobby. A gallery of photographs from early explorations into the country were on show as you wander in, highlighting famed expeditions and the first moments Papua New Guinea and the Western Worlds intersected.

It was earlier that day that I found myself diving into new worlds of culture and life. I rose with the sun and soon met Amis Rocky and Raymond (picture below). These two were my guides for the few nights I stayed in the highlands. Amis Rocky and Raymond were their Western names. They would not tell me their real names in fear that I would use sorcery on them if I knew. Spirituality is paramount in their eyes and cultures. Papua New Guinea is a country that was brought from the Stone Age and into the Modern World within a very short amount of time. This is seen throughout many newish cultural norms and interactions with westernized areas.

Both Amis Rocky and Raymond were from local villages. Raymond would go on to tell me, “When I’m with you, I dress like this and speak English. Being a guide is my job. But I am really a wildman. I live in my village and wash in the river.”

Before any touring started, we made a stop at the local outdoor market. Flooded with people doing their daily shopping and trading produce, this was my first moment of local immersion. I was this outsider attending their local interactions; at least that is where my mind was. Up until this point, I had always kept myself a bit on guard , simply because I did not know what to expect.

Within moments out of the van I was put at ease. Every step and I took was greeted with smiles, handshakes and kids asking to take pictures. It was almost overwhelming how friendly and receptive the locals were. Handshaking is a foundation of meeting people in PNG. I must have shaken the hands of hundreds of people during my time in the country. Once you shake hands, you are no longer a stranger – you become a friendly visitor. The children were all waving and making this “click click click” sound towards me. This was them asking for you to take their picture – they loved having their picture taken. Though they would never see that picture, something about it filled them with eagerness and energy.

The market was vivid, filled with fruits and vegetables, many of which I had never seen. I was now surrounded by their everyday life, and that’s how i started to feel. As I walked by each stand, I was offered samples of different fruits, plants and nuts. I indeed took them up on these offers, because I have this incautious desire to try everything, something I would not enthusiastically recommend. I learned later that I gave my stomach and body a bit too much credit at this market than I should have. I’ll leave that captivating story out for now.

I left the market energized by all the positivity and friendliness. While driving away from the center of Mt. Hagen and into the highlands, the scenery became more colorful and dynamic. The roads began to narrow and wind around the highlands like a serpent. Out the window were scenes of villagers farming for potatoes, coffee, teas and other indigenous produce. The farms stretched up and down hillsides, with symmetrical patches of raised earth dug into the ground to separate their crops. This is how the villages make their livelihood. These crops feed their families while also providing them with valuable resources for trading, market sales and ceremonial offerings. Also, in the highlands, pigs or bores are treasured. They are of incredible value and are worth thousands of Kina (PNG Currency at .40 USD currently).

The first village stop was Kaip. My initial thought of the word village was something much larger than it was. Villages however, are more like family lands. The villages are what the larger tribes or clans are made up of. When tribes gather, hundreds come together to perform ceremonies and offerings.

The patriarch of Kaip invited me into his dwellings, showed me the tools they use for farming and then lead me into a gathering house to demonstrate how different villages socialize, especially the single young men and women. We all sat inside the house, swaying back and forth as each member of the family began to harmonize and sing. It’s bit different from the club music and bar scene back home.

Niem was my next village visit. Upon exiting the car I was led through their farms and further into the denser jungle. He was eager to show me a demonstration they had set up, a war dance. Before tribes and villages go to war or embark on dangerous journeys, they perform ceremonial dances that “shake the earth.” (not Shake it Off) The vibrations of the earth are intended to speak to the gods in the mountains and ask for luck, protection and guidance.  Everything that happens within these villages is formed around their deep-rooted spirituality. During the demonstration, the earth did begin to shake and the chants and instruments only enhanced a rugged tribal feel. This was a beautiful new world for me.

As the day started to fade, I made one last stop at the village of Tukua where I was introduced to an actual Witch Doctor. At this point in my life, this was the only witch doctor I had ever met. Before my adventure was over, I had met three! We then spent an hour walking through his village while he taught me (interpreted through my guide) about the signs and signals the spirits of earth relay through forces like wind, animal and sounds. It was fascinating and quite eerie. I am not one to believe in such spirituality and sorcery, but you definitely become caught up in the moment as you listen to tribal tales and stories about the spiritual world.

As the sun started to set, I headed back to Rondon Ridge. It was a long day and exhaustion was setting in. However, with the last little bit of light I was determined to hike up the hills behind the property to catch the sun setting over the highlands. I ventured out alone with a hand drawn map (pictured below) from the lodge and proceeded to get lost for a bit while trying to find a great vantage point. Being brought up in the GPS generation made me realize how important learning to read maps should have been. Though, I managed to find my way back to a trail after a hectic 10-minutes of confusion and was ready for dinner and the bed. 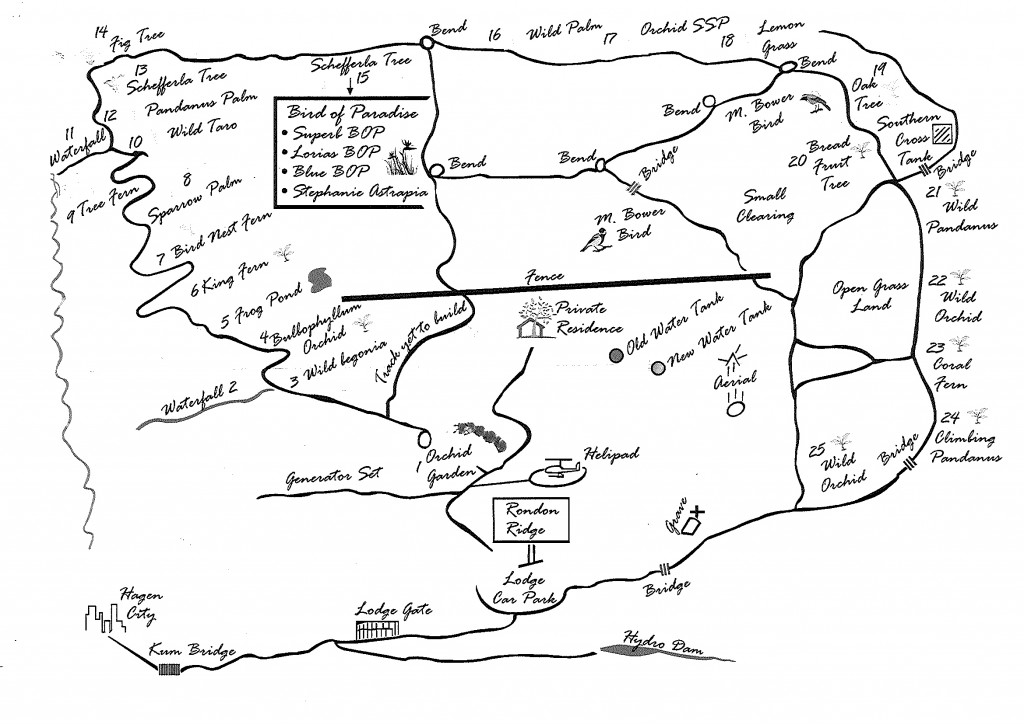 It was an incredible first day, but the adventures are only beginning and the days only more intense.

What I learned on day 1

Look out for part II. 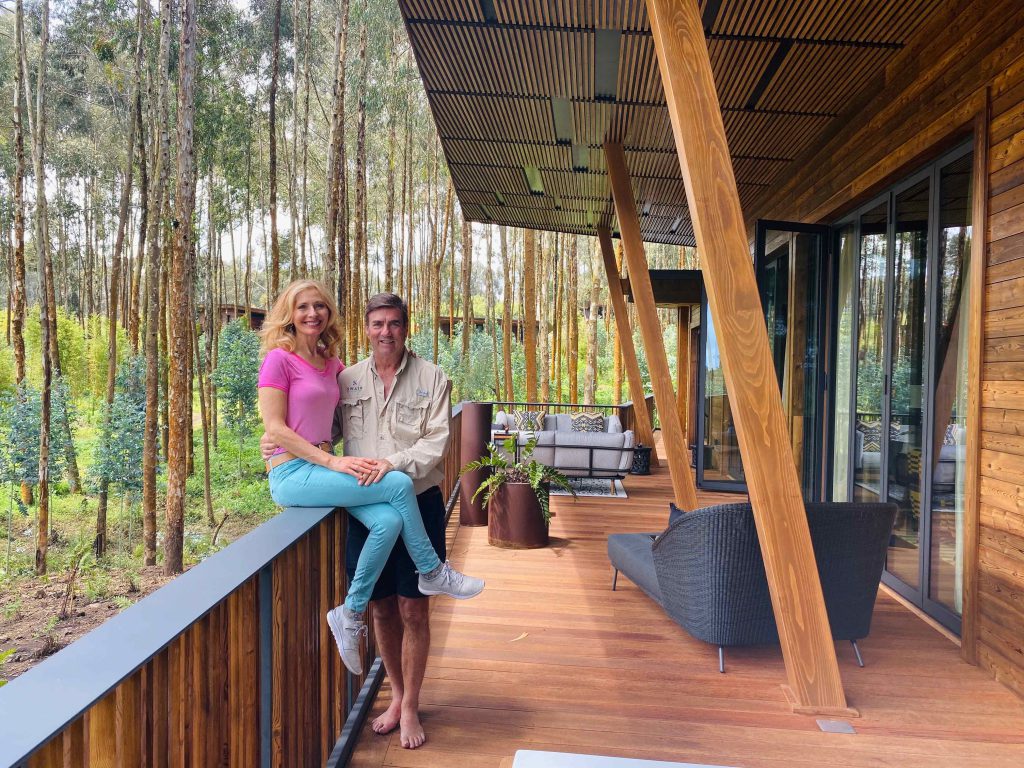